What we hear says a lot about them ...

As Catholics, we are approaching the Liturgical Season of Advent ... that is, the season where we prepare for the Birth of Jesus Christ at Christmas.

There is a Child coming home soon, so we must prepare. We must clean out the places the child will rest and eventually toddle around and get into mischief in.

For the first born, there are things like the room or space for the child, the crib, clothes, and perhaps some study with close friends who already have children to prepare.

The season of Advent truly follows a close parallel to the beginning of the human cycle of life for both the parents and the child.

For first time parents, the season of Advent takes on a whole new meaning when we take the time to meditate on the mysteries presented to us during the first part of the Advent season.

It becomes very easy to "connect the dots".

As Catholics, we should be very mindful of that parallel, as there are many distractions now coming out in our midst that try to get us to focus on the actual Birth and the "gift giving" aspects. Lost are the patient working at preparation and waiting for the child.

It becomes imperative that we make an act of the will to deny those distractions, and plead with the Holy Spirit to help us maintain a spirit of preparation. For example, it may mean tuning out some of the Christian radio or Internet streaming stations that are now starting to play Christmas Carols.

In discernment, the distractions must go. And, we must prepare an explanation for our children. Why are we not allowing Christmas related music and articles into the house until Christmas Day or just before that?

For parents who encouraged the second child and subsequent children to be involved in the pregnancy of their younger siblings, it will not be too hard for the children to make the connection.

Remember, December 26th will see all of those "distractions" disappear ... and so too the Christmas music, so the effort will then need to be in celebrating the Octave and further, the 12 Days of Christmas. It will be up to us to carry Him into the world after His birth, to share Him with the world.

Have a Happy and Holy Advent!

John Everett
Posted by JohnE at 13:42 No comments:

From the Mouth of Babes: Jesus and Toast 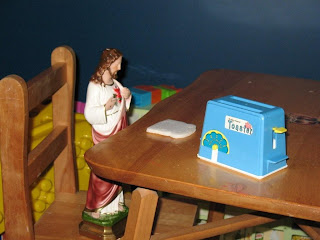 Jesus paid our 3.5 year old Anne-Marie a visit in her room.

So, she "sat" him down and they broke bread together.

You shall know Him in the breaking of the bread. Luke 24:35

John Everett
Posted by JohnE at 14:15 No comments:

Labels: Children, From the Mouth of Babes, Jesus

On the breast of Christ

How many of us truly believe that we are loved?

How many of us, especially those of us who have been abused in so many ways, can truly see and know that we can rest our head on the breast of Christ as the disciple John did?

It is truly a sign of healing, and the Touch of Christ, when we can allow ourselves to shed tears and slowly allow our head to be held to His breast.

The healing has reached even deeper when we can "feel" His hands and arms wrapping themselves around us so that we can truly rest in His Love for us.

And, with the tenth leper we pray, "Thank You my most gracious healer. Thank you for loving me whole again."

Praised be Jesus Christ, the Lord and Giver of our lives! :D

John Everett
Posted by JohnE at 20:36 No comments:

The Silence is Deafening and Deadly

Sometimes Love needs to be tough. This is one of them...

A number of decades ago one could hear a rally cry, "I am woman, hear me roar!"

It was the cry of Western Feminism. Indeed, we heard that cry from all corners of Western society. How vocal they were!

Women worked hard to establish themselves as equals within their respective society.

Today, Western Feminism is still around, but strangely silent in the face of our sisters who are being persecuted in the Middle East and other areas of the world.

Daily, many women in Middle Eastern countries face persecution. From genital mutilation, to being held culpable for a man's lust by being forced to cover her entire self as if she were something evil. Just let her try and raise her voice in some form of protest to protect herself and see what kind of reprisals, possibly even death, she would have to endure.

Lately, the persecution has turned deadly. Key women in Afghanistan who have been advocating for women's education, equality, and freedom from violence have been murdered. They faced down their oppressors by continuing on with their advocacy for equality every day. It cost them their lives.

Again, our Western feminists are quiet in the face of all this.

Where is Western Feminism's rallying cry for their sisters in the Middle East now?

That silence has turned deadly.

But then, it has been deadly since Roe hasn't it?

Perhaps we have stumbled upon Western Feminism's Sacred Cow. Our sisters in the Middle East cherish all life within the womb don't they?

Tough questions coming back to the Western Feminist from her sister in the Middle East no?

Western Feminism, where is thy equality now?

Oh how thou must bow before thy Sacred Cow!

I just recently caught a glimpse of an article in a Catholic newspaper that indicated a Western Canadian Bishop by the name of Bishop Fred Henry had withdrawn his support for the Calgary based Canadian Centre for Bioethical Reform.

The reason he had withdrawn his support? Because of a campaign the organization was waging that had huge pictures of aborted fetuses.

The campaign is called the Genocide Awareness Project (GAP). And, it equates abortion with genocide.

His premise was based on the dignity of the human person. The images violate their human dignity. They deny the respect due them he said.

Why would we show images of dismembered and destroyed children to bring a "Pro-Life" point across? How are images of "death" "Pro-Life"?

The GAP campaign really is no different than the daily news, or the steady stream of violence in the media. Our children, even more so than us, are being conditioned to see this kind of violence via many different types of video/arcade/computer games, extremely violent and gory movies and more. This type of campaign will not phase them or most of us for that matter.

It is time to take a deep breath, and offer a prayer of supplication to Our Lady for guidance in the Pro-Life cause.

Who better to turn to than the Lady who carried Our Lord for nine months to discover where we truly need to focus our energies: The beauty of motherhood and pregnancy.

It will be our attitude as Catholic and Christian men towards motherhood and pregnancy that will be an instrument of conversion.

Our attitude towards our wives when they are pregnant is a very important witness to the love we have for them and Our Lady. It clearly demonstrates our awe and respect for the Gift of New Life.

Our attitude towards the women around us who are pregnant directly reflects our love for Our Lady. Any pregnant woman will know right away that our smile and offer of assistance was totally genuine and out of respect for them and for the Gift of New Life within.

Our attitude towards any woman must reflect our love for Our Lady. It must be chaste!

We Christian men must counter the culture that nurtures the attitude that life is disposable.

We must counter the culture that teaches that a woman's body is an object. The attitude of the "person as object" and the lack of personal dignity makes the decision to end a pregnancy with a "procedure" easy with little or no thought to the consequences.

Our attitude, as men of God, towards women will impact the Pro-Life cause.

We have pretty much finished the migration over to the new Blogger.

We will be retiring the old subject specific blogs.

Hope it wasn't too annoying having most of our posts come up in your reader again! We cleaned up the old references, and set tags to everything.

Hopefully we will be blessed with some time to actually start posting on a somewhat regular basis!

Pax vobis (peace be with you)

A simple night time prayer before bed for children

We have a simple prayer that we pray with our children just before we say our final, "Good night".

It is offered in the form of cant/response. Lucille and/or I say it first, then Anne-Marie repeats it. Raymond is still too young yet, but he does become quiet and quite rapt during the prayer.

After all of this time, we have upgraded the blog to the new Blogger interface.

It will probably mean some work to restructure everything as we can now use the Tags feature instead of the complexity of multiple blogs for each category.

We haven't quite decided yet.

We are still around. Please pray for us as life has thrown quite a number of curve balls at us, along with being all around hectic!

John Everett.
Posted by JohnE at 10:30 No comments: